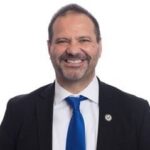 Mr. Shane Staszcuk began his education career in the early nineties. Throughout his career as a teacher and administrator, he worked in a variety of education settings. Over the years and across locations, the one constant he understood was that all parents want the best education possible for their children. When in 2005, he became principal at Our Lady of Mount Carmel Academy (OLMCA), he focused on creating a fair and just educational experience for all students, regardless of ability or outside pressures. For Principal Staszcuk, children came first.

While education career leaders often have a set of core principles they operate by, the saying, “try to bring light, not heat” served as a leadership touchstone for Principal Staszcuk. He used it as a reminder that true leadership requires clarity, calmness, and light, rather than heat, to remedy contentious situations. In his early days at OLMCA, he put that into practice as he faced resistance to growing the school’s inclusive education program.

Nestled in the Lakeview East neighborhood of Chicago, OLMCA is a small private prekindergarten – 8th grade school that is in an academically competitive area with many schools vying for high-performing students. One of the pressures many schools face is striking the balance between meeting the demands of some stakeholders and doing what is best for all students. When Shane Staszcuk took the role of principal, he inherited a floundering inclusive education program, called TLC, that included a part-time teacher serving only a handful of students. Without the proper level of support, Principal Staszcuk understood that it was in danger of fading out. From his perspective, that was not acceptable. Recognizing that providing a fully inclusive program at a small, private Catholic school was rare, he understood that it would be an uphill battle to garner the stakeholder support to not only keep the program, but to expand it.

As he embarked on his mission, Principal Staszcuk fostered a supportive, inclusive sense of community and service. He worked hard to convince the school community that the TLC program would not only benefit the program’s participating students, but the school community at large. Over his fifteen years as principal, he has been as a fierce advocate for students with disabilities and their families. He met with parents, addressed their concerns, and never wavered from his position that all students would be served by OLMCA.

Under Principal Staszcuk’s leadership and partnerships with outside organizations, the TLC program expanded to include a full-time Director of Inclusive Education and a team of support staff and therapists. The program now serves over ten to fifteen percent of the total student population of 250 students. Students with Individual Education Programs receive nearly all the services that would be provided at a public school. No longer are families forced to make the difficult choice between leaving their faith-based school to receive inclusive education services.

As the TLC program grew and more students who learn differently enrolled, OLMCA maintained stellar academic standards. Now the school is seen not only as an academically competitive school, but one that is well known for serving students of all abilities.

Principal Staszcuk looked ahead to the future to understand the long-term impacts of key decisions. His decision to fight for and provide support for the TLC program was out of his commitment to meeting the needs of the entire school community, not just one subset. Without his strong leadership and commitment to making OLMCA a truly inclusive school, OLMCA would not be the robust, diverse, loving, welcoming, and supporting school it is today.