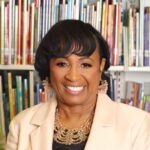 “Our children are not at-risk, they are at-promise.” That is Mardele Early’s reminder about what is possible when you genuinely believe in the promise that young people hold and that educators can unlock. This reminder has formed the bedrock of Ms. Early’s career as an educator for the last 46 years.

Mardele Simmons Early, a native of New Orleans, has dedicated her career to serving its education community at every level. After starting as an English Language Arts teacher at the middle and high school levels, she recognized that prevention was the key to eliminating the achievement gaps she witnessed in the upper grades and moved to the elementary level. She focused her energy on preparing young students to succeed in any environment and to aim for higher education. She earned a degree in Educational Administration and Supervision and in 1994 took her first principalship where she helped turn-around a struggling school. In 2001, she became principal of a small school, Lake Forest Montessori Elementary (LFMES), in the New Orleans East area. She led the school to become the second-highest performing elementary school in the district.

Ms. Early recognized that the success of LFMES could be expanded, and she assembled a team to write a charter school application. Just as the application was making its way through the review process, Hurricane Katrina devasted the area and demolished the six portable structures that made up the old LFMES site. The team secured a temporary site, and Lake Forest Elementary Charter School (LFECS) was launched in 2006. After seeing the devastation caused by Katrina, Ms. Early began to imagine a new, state-of-the-art structure to house LFECS. By 2016, Ms. Early had secured the funding necessary to build a new school, and they moved into a sprawling 112,000 square foot building on 16 acres of land that now serves nearly 670 students. Affectionately known as the Beacon of New Orleans East, the school has been recognized as the highest performing K-8th grade public school in Louisiana.

As LFECS’s Founding Chief Executive Officer, Mardele S. Early has implemented her vision for every child to attain mastery of reading, writing, mathematics, and higher order thinking skills before entering high school. She exacts high standards for the entire school community, including families, to meet high expectations, high levels of achievement, and to be accountable so that all students are prepared for the future. Ms. Early cultivated a data-driven culture with student achievement at the core. Teachers understand that the school operates within an instructional framework where teaching and learning are reflective and responsive processes. Staff are provided professional development designed to promote academic rigor, while also allowing for innovation and creativity in instruction that is nestled within data inquiry.

As the school leader, Mardele Early keeps the schoolwide vision of excellence as the guidepost for decision-making and describes the process as circular, rather than vertical. She values the exchange of ideas and gathering input from all stakeholders while relying on surveys, data, and analysis to guide the group to a data-informed decision. As one parent described, “Ms. Early’s decision-making is just and honest. She is not afraid of making difficult decisions to support and protect our young scholars.” When making decisions about materials, resources, curriculum, instruction, staffing, and programs, she first determines how it will promote student achievement and impact teaching and learning.

During the COVID-19 pandemic, Ms. Early leveraged her partnerships and relationships in the community to effectively support the Lake Forest Elementary Charter School community. She was one of the first schools in the area to transition to effective virtual learning. She shifted professional learning to ensure staff, students, and families had what they needed to engage in virtual learning, set up systems of communication through technology, and made hard decisions to keep the whole community safe. Building on her established partnership with the community hospital, she set up a clinic for all staff in the school to be vaccinated.

While she has earned the reputation as a leader who demands excellence, Mardele Simmons Early has kept the promise to her students, staff, and families that “if we remove barriers for students, they will succeed.”