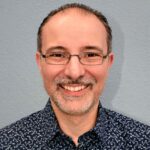 The desire to build and sustain a culture of excellence and innovation drives Principal Demetrios Demopoulos’s leadership style, and his humble beginnings had a lasting impact on his views of education. Principal Demopoulos’s path began in a small town in Greece where the value of education was sparked by family and reinforced by influential teachers along the way. He made his way to the United States to further his graduate studies in computer science. After teaching undergraduate classes at Rice University, however, he found his true passion and shifted his focus to becoming an inspirational educator. His goal was to inspire students to dream bigger and reach further than they could have imagined, just as his teachers had done for him when he was younger.

In 2002, Principal Demopoulos learned about a group of people hoping to open a public charter school focused on mathematics and the Greek language. After meeting with the school’s founders, he was immediately inspired to join the team and become a mathematics instructor for Archimedean Academy’s 1st through 5th grades. Then, in 2007, Demopoulos was offered an exciting opportunity to help establish and open a new high school, Archimedean Upper Conservatory, for which he would serve as principal.

As the principal of a new school, Demopoulos had to garner buy-in from the start. The goals of the Archimedean Upper Conservatory were ambitious: to defy expectations by providing all students with a rigorous college preparatory academic program so that they would be able to earn admission into prestigious institutions of higher education and qualify for necessary financial aid. With a diverse student population, the majority of whom would be first generation college students, the challenge was clear.

Principal Demopoulos recognized that the Upper Conservatory was a different model than the community was used to. Not only did the Conservatory offer a dual-mathematics curriculum combined with Greek language immersion, but it also was significantly more rigorous. The Conservatory included mandatory philosophy classes every year, emphasized writing across the curriculum, exposed students to challenging and advanced science courses, extended the school day, and emphasized academic competitions. Principal Demopoulos found that many entering students had a difficult time picturing themselves in rigorous classes, often because they had been academically grouped as early as 1st grade. The challenge for Demopoulos was to communicate to the whole community that all students were capable of succeeding. Thus, in addition to building a rigorous and unique curriculum designed to prepare students for success in higher education, he helped students and families, convincing them to push themselves out of their comfort zones and aim higher.

As a leader, Principal Demopoulos worked tirelessly to inspire teachers, students, parents, and the community to think beyond what might be expected of students. He asked them to embrace different, innovative ways of building scholars by setting high expectations while providing the supports necessary to meet the challenge. Taking cues from his past experiences in the corporate world and academics, Demopoulos engaged stakeholders at every step, prioritizing accountability. He approached problems like an engineer and kept up-to-date on research and ideas from the field. When working with faculty, he modeled expectations by continuing to teach challenging courses himself. He also was available for meetings with parents after the regular school day, conducted review sessions on Saturdays, and facilitated PSAT/SAT/ACT practice sessions on several Sunday mornings. This level of commitment and service, from the principal and by teachers, who followed his lead, demonstrated to students and their families that they were all in this together: one Archimedean family.