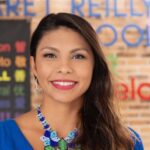 Over the course of Ms. Corrine Morrís Saenz’s 18 years in education, she has held several roles including bilingual teacher, school counselor, and administrator. She developed a reputation for being positive, collaborative, tough, caring, and established a proven record of high achievements for all students, regardless of background or circumstance. When she became principal of Reilly Elementary in 2016, she set the school’s sights on implementing high-quality dual language programming within a social-emotional framework for high achieving bilingual, biliterate, and multi-cultural learners.

Principal Saenz completely shifted the instructional design and approach when she arrived at Reilly. Prior to her leadership at the school, Reilly had an early exit transitional bilingual model. She flipped the model and implemented school-wide two-way dual-language Spanish/English and Mandarin/English programs combined with a data-driven approach to instruction. The majority of students at Reilly were predominately native Spanish-speakers, but word spread quickly about the benefits of dual language instruction. As a result, many English-speaking students transferred to Reilly from across Austin. This Title I school with a large concentration of economically disadvantaged families, became a sought-after school and quickly reached capacity.

Bringing the whole school community together to move the school’s vision forward was a priority for Principal Saenz. She engaged the community to learn about the new programmatic approach. She assembled a team of teachers to meet regularly to discuss implementation challenges, share ideas, and strengthen the curriculum. She also focused on creating partnerships with families and the community at large. She recognized that the school’s culture would grow if families were united around cultural traditions. So, Reilly hosted several multicultural events, such as Tamalada and Lunar New Year. During these events, families learned how to make tamales and dumplings. Families led these events and worked together as leaders in their children’s school and community. Principal Saenz describes the process as a metaphor for the school. She states, “It takes many people, in continuous cooperation, all working towards a common goal, to produce a well-rounded, academically successful students.”

Having grown up as a Latina, in a Title I school, and in a predominately economically disadvantaged neighborhood, Principal Saenz takes issues of equity seriously. She considers it her responsibility to not only provide a safe and healthy place for students to learn, but to advocate for students of all cultures, languages, and economic backgrounds. Principal Saenz strategically makes everyone feel welcome. Families are welcomed into the school by multilingual signs that communicate empathy, inclusion, and a commitment to student success. Each month the entire school engaged in a project that honors and recognizes a different cultural heritage. In social studies, teachers work with students on researching, exploring, and creating ways to learn about different historical events and civic leaders. Students create presentations, drawings, writings, and creative representations which are then displayed along the walls of the school.

Part of Principal Saenz’s philosophy about creating equity is creating experiences and modeling how to be part of a community. She developed partnerships and sought funding to go beyond the classroom walls. She partnered with the University of Texas at Austin to work on developing an outdoor research area and green classroom for play and exploration. She infused the school program with a larger world view by helping students and the community understand the vital importance of how to be good to the earth and all living things. Teachers have embraced this view by creating gardens and green space, which draws families and community members into the school grounds. She also partnered with several city and government agencies and departments to create a mentor program for students. The mentor program nurtures students’ confidence and self-esteem while mentors serve as role models. During the COVID-19 pandemic, Principal Saenz mobilized staff and families to discuss the immediate needs of the most vulnerable families of their school. The group determined that food insecurity was at the top of the list and raised over $20,000 to purchase grocery store gift cards to support families through several months of need.