Jesuit College Preparatory School of Dallas offers an excellent, Catholic education in the classical Jesuit tradition to form a community of men with high moral principles who are dedicated to serving others. In offering a college preparatory education, Jesuit emphasizes academic excellence and intellectual challenge. The interaction of students and faculty introduces each student to the various fields of human knowledge, invites him to a mastery of particular skills, teaches him how to learn for himself, and encourages him to think critically. 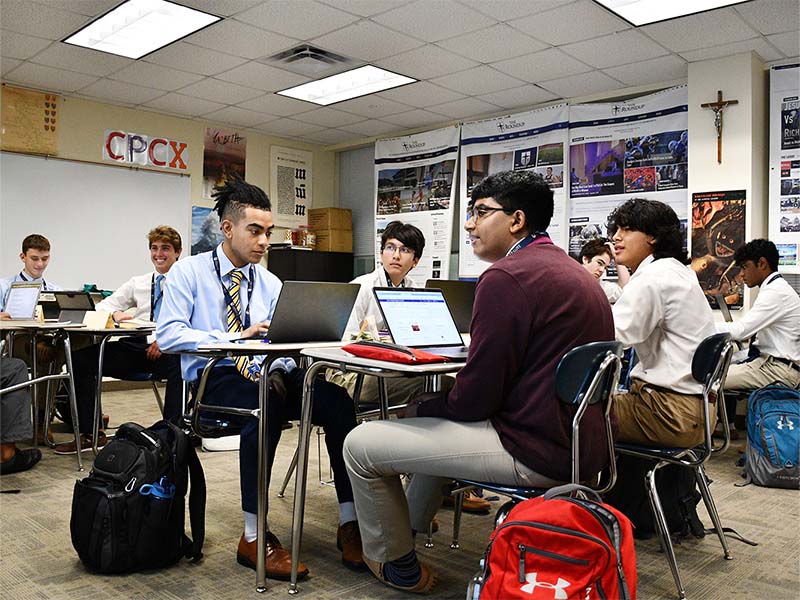 The Jesuit curriculum serves as the foundation for lifelong learning.

Jesuit Dallas was founded in 1942 as a Catholic, private, independent, all-boys high school under the direction of the Society of Jesus. Following the 500-year-old Jesuit tradition of St. Ignatius of Loyola, Jesuit Dallas strives to form young men into leaders who are open to growth, intellectually competent, committed to working for justice, religious, loving, and physically fit.

The school's focus on formation of the whole person results in graduates who seek the fullest development of their God-given talents and put faith into action. As described by the Jesuit Dallas President, "Our students are not just called to be the best in the world; they are called to be the best for the world."

Jesuit Dallas emphasizes academic excellence and intellectual challenge, and it seeks to inspire a joy in learning and a thirst for greater and deeper knowledge. The academic experience at Jesuit Dallas is enriched through research projects, field trips, lab tours, and extracurricular competition. Additionally, academic, social justice, cultural immersion, and exchange programs take our students all over the globe. These experiences provide opportunities for our students to take learning outside of the classroom, serve the poor and marginalized, and understand more fully the diverse cultures of the world.

Jesuit Dallas faculty and staff are committed to forming young men who are well-rounded academically, emotionally, spiritually, and socially. Nearly 100% of the student body participates in at least one of the School's 100+ extracurricular offerings, which includes a medical society, and nationally reputable programs in robotics, debate, and athletics.