St. Thomas More Parish School's mission is to open the mind to knowledge, the heart to service, and the soul to God's presence in creation. 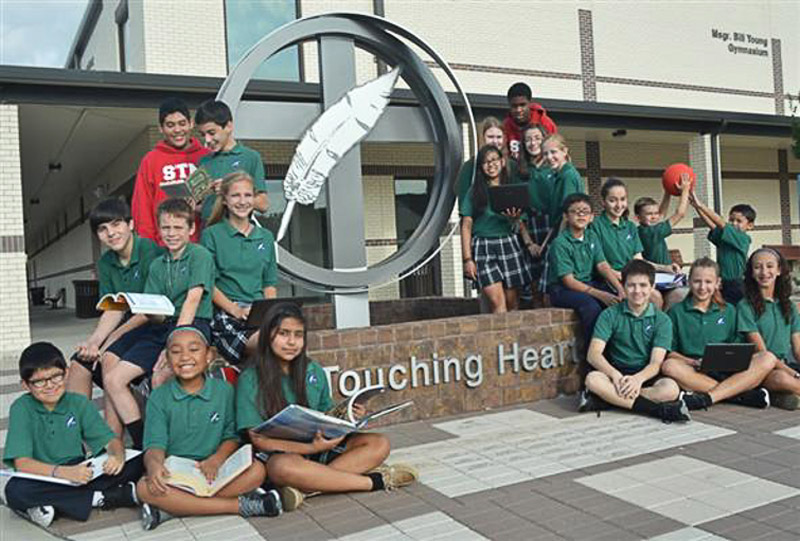 Students celebrate their learning community around the STM logo sculpture.

Since St. Thomas More Parish School opened its doors in 1965, it has maintained a population of over 500 students. As one of the most sought-after schools in Houston, students come from three counties, 54 zip codes, and membership at 29 churches. The families reflect the socio-economic diversity and the multi cultural population of Houston. Like the city, the school is comprised of minorities where no ethic/racial group has a majority. Along with strong Catholic identity, recognized at the 2013 National Catholic Education Association (NCEA) meeting, STM offers a rigorous academic curriculum evidenced by the success of students, both cognitively and affectively. At the city-wide Catholic competition in 2014, STM won the coveted Academic Sweepstakes Trophy for the seventh time in the past eight years; forty percent of 7th grade students qualified for the Duke University Talent Identification Program; and the Robotics team captured first place in the First Lego League qualifying tournament. STM boasts a strong athletic program with thirteen competitive teams and a myriad of extra-curricular activities. St. Thomas More, celebrating its 50th anniversary, prides itself on doing the "ordinary" with an extraordinary amount of dedication of the school's greatest resource, its teachers. As the school endeavors to uncover the special qualities and gifts hidden in each child, it finds that it has created a unique educational environment that challenges each child to reach his/her potential and value his/her uniqueness. Since St. Thomas More began educating students, the school has been faithful to its mission expressed in the tagline "Reaching Minds, Touching Hearts, Shaping Souls."