To increase the number of students from underserved communities with the academic preparation and personal character for school and life success. 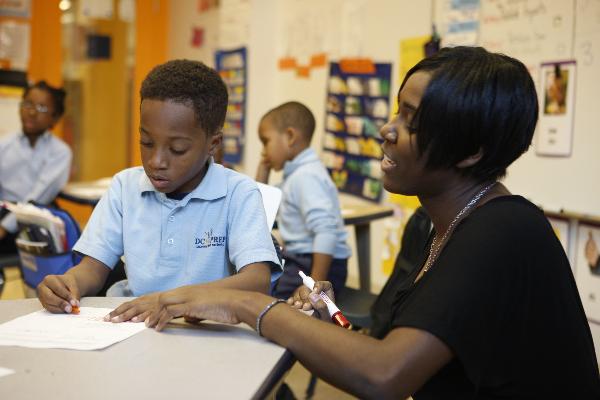 DC Prep is the top-performing network of public charter schools in the nation’s capital, guided by the vision that every child will be prepared academically and socially for a successful future.

Founded in 2003, DC Prep is celebrating its first decade of raising the bar and currently serves 1,200 students in preschool through 8th grade on four campuses. Over the next decade, it will grow to ten schools and enroll 3,300 students, or 10% of the public school students in DC’s poorest neighborhoods.

DC Prep’s Edgewood Elementary Campus (EEC), opened in 2007 and serves 3-year olds through 3rd graders. As the first elementary school in DC Prep’s network, EEC has served as the model upon which its subsequent elementary schools are based. Rigorous academics and character education are the twin pillars upon which DC Prep’s educational model is built. Engaging, challenging instruction from exceptionally gifted teachers is leavened with nurture and joy, and a sequenced set of Prep Skills — the habits and qualities for life success— are woven into every part of the school day resulting in ever-increasing levels of student achievement. These beliefs and practices distinguish EEC and contribute to its ongoing success as a school where learning is sacred, and where a strong home-school partnership contributes to student success.