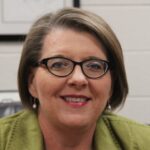 gue came to Weiner Elementary School three years ago, excited by the opportunity to turn the school into a dynamic learning environment. At the time, school enrollment was dropping, as were test scores, and low crop prices were reducing family incomes in the rural area. A former Weiner Elementary student herself, Mrs. Hogue took the job as principal guided by the belief that the climate and culture of a building affects every aspect of the lives of students and the staff, a belief that she put into action on her first day.

One of Mrs. Hogue’s initial actions was to expand the school’s Gifted and Talented program to include all students, providing skills that would prepare them for high school and beyond. Students participate weekly in C Seminar, a class taught by a veteran gifted and talented facilitator, addressing social skills, creativity, and ethics. Mrs. Hogue also initiated an activity called Club Cardinal in which, every Friday afternoon, students select a class taught by staff or community members on topics such as cooking, volleyball, sign language, drawing, or dance.

During the spring of Mrs. Hogue’s first year, the Arkansas Department of Education released the guidelines for the new Arkansas Schools of Innovation (SOI), which she immediately homed in on as the perfect opportunity to make major changes to the school. After acquiring support from her leadership team, she and the faculty produced a wish list that included addressing the needs of the whole child, 21st century learning, and communication skills, Spanish for all children, technology as a tool, social skills, differentiated foundation skills, and culture studies. From that list, Mrs. Hogue and her team devised a SOI plan designed to connect the school’s isolated children with the world’s possibilities through technology and expand their cultural knowledge and appreciation through an emphasis on the arts.

After Weiner Elementary received SOI status in 2014, Mrs. Hogue worked with parents and teachers to visit local businesses and civic groups to explain the new program. Those efforts resulted in the Weiner School Children’s Endowment, a nonprofit organization through which the community and other supporters contribute financially. In the first year of the non-profit, over three hundred community members and businesses contributed, making it possible for the school to provide each student with either an iPad, ChromeBook, or a MacBook, and to provide training for teachers. Through the technology, Weiner students are involved in Google Classroom, Skyping, and blogging, creating digital projects, and taking virtual field trips.

Also through Weiner’s SOI program, Mrs. Hogue ensured that every student in grades K-6 attends a daily Spanish class taught by a native Spanish speaker. Not only are Weiner Elementary students now excelling in Spanish, over 50% of eligible students elected to take Spanish I for high school credit during the past school year, and this year those students will be in Spanish II with a new group of fifth graders electing to take Spanish I.

In addition to the focus on academic opportunities, Mrs. Hogue works to make sure Weiner Elementary embodies the school’s slogan: “Weiner Elementary, a great place to be a kid.” She encourages the faculty to care for each child, not just educating them but infusing them with confidence, character, and a sense of well-being. Students are praised for good behavior, triumphs, and achievements, and Mrs. Hogue recognizes every student as a Student of the Day during the year.

In a testament to how Weiner Elementary has turned around under Mrs. Hogue’s leadership, the average daily attendance rate has gone from 91% to 98% and the tardy rate has dropped by 90%. When asked for one word to describe the school community on an end-of-year survey, students, staff and parents overwhelmingly used the word “family.”