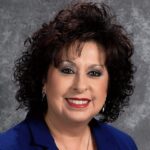 t Talkington School For Young Women Leaders is the highest performing school in its district and is ranked in the top 1% of schools in Texas. Graduating students, all 100% of them, can leave the school with up to 65 college credit hours, shattering stereotypes that have traditionally depicted young women from disadvantaged backgrounds as incapable of academic excellence. However, this was not always the case. Five years ago, before Mrs. Berta Fogerson arrived at Talkington, enrollment from the middle school to the high school was on the decline. Planned as a magnet school designed to serve young women from diverse backgrounds and with a focus on first-generation, college-bound students, the school rating, based on state assessments, had fallen below what was expected. Although the school advertised an AP high school curriculum, it did not offer AP courses. Disillusioned by the school’s lack of progress, district leaders in collaboration with the TSYWL Advisory Board members hired Mrs. Fogerson to transform the school.

A three-decade veteran of the education profession, Mrs. Fogerson approached her task at Talkington with the belief that high standards—for herself, her students, and her staff—were the key to achieving optimal results. She made it a priority to support teachers who believed that all children could learn, and she trained and worked with them to develop lessons that addressed a need to increase rigor and relevance.

During her first year, in an effort to find a process that would help teachers analyze their instructional practices, Mrs. Fogerson submitted a successful proposal to take a team of teachers to the Data Wise Institute at Harvard. Her core team received training on the research-based process. By implementing what they learned, teachers became involved in evaluating their own instruction, identifying problems of practice, and creating a school-wide plan for addressing instructional issues. Building on that success, Mrs. Fogerson continued to support teachers with resources to help them deliver a college readiness curriculum, such as providing College Board Advanced Placement training, a move that led to a curriculum that includes all pre-AP and AP courses in both the high school and middle school. For students, this shift to high-expectations and advanced level learning was challenging. To meet this need, Mrs. Fogerson put in place extended day tutoring for all students, but specifically for those who entered Talkington lacking a strong academic foundation.

Beyond the basics of tutoring, Mrs. Fogerson worked to enhance the students’ summer enrichment experiences, college trips, and community service and leadership opportunities that are critical components of the school’s curriculum. The partnerships Ms. Fogerson has developed on behalf of the school with the Texas Tech Mathematics Department and the College of Engineering have enabled student to have access to equipment, resources, robotics demonstrations, training, and summer internships and have strengthened the STEM component of the school’s curriculum.   Other Texas Tech partnerships have resulted in opportunities for lectures and performances by renowned artists and speakers. In collaboration with the Junior League of Lubbock, she approved the implementation of the SPARK Program in an effort to develop self-confidence and leadership in 8th grade students, which resulted in a positive impact on the school and the community. Finally, under Mrs. Fogerson’s leadership, the Mother-Daughter Program, sponsored by the American Association of University Women, came to fruition with the purpose of breaking down the myths and barriers for young women becoming first-generation college students.

In the five years of Mrs. Fogerson’s leadership, Talkington has progressed markedly. In 2014, Talkington celebrated its first graduating class with 100% of students graduating and a 100% acceptance rate into four-year colleges. The following two graduating classes have sustained the same rate of college acceptance and have earned a cumulative total of 2.5 million dollars in scholarships. Mrs. Fogerson does not hesitate to share her life story with her students:  the story of a girl who grew up in extreme poverty and who earned the privilege of becoming their principal by acquiring an education. She wants them to know she understands their challenges and issues, and she constantly reminds that they can persevere as long as they follow the school motto: “Reject Average, and Embrace Excellence.”